Central Asia Barometer has been operating in areas of research, analytics and dialogue over the past ten years. 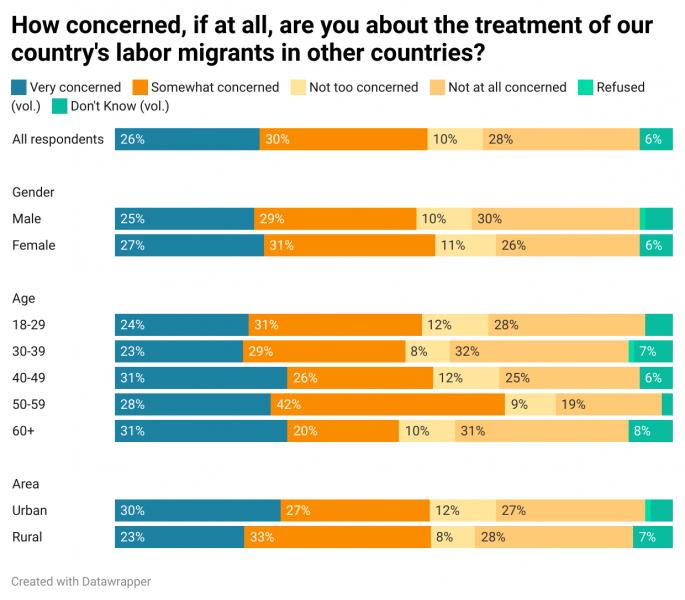 Around 55% of the Uzbekistani respondents were either very or moderately concerned about the treatment of domestic labor migrants in other countries, while another 30% were not too concerned. Only 10% of the population showed no concern at all. The levels of concern on the topic among the different age, gender, and geographic groups within the Uzbekistani population was more or less uniform, with an exception of the 50-59 age group, who expressed much higher concerns, with 70% very and moderately concerned- the highest among all other demographic groups. 85% of the population expressed some level of concern. 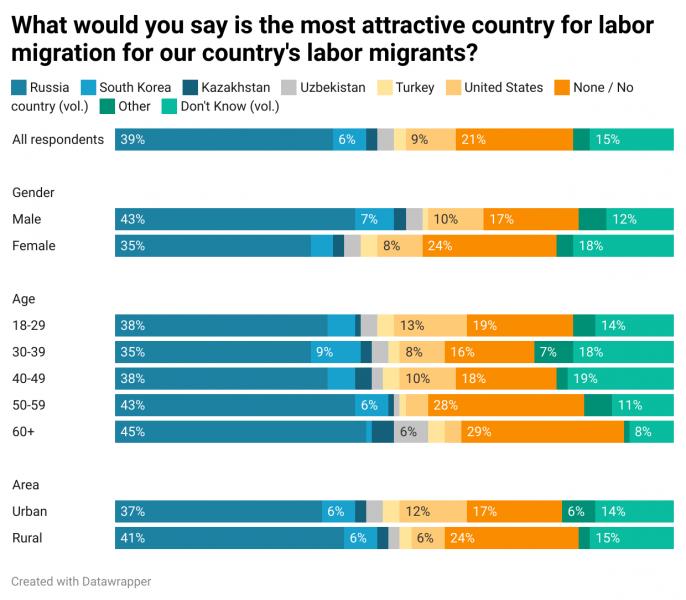 For 40% of the Uzbekistani respondents, Russia was seen as the most attractive country for labor migration, whilst around 20% reported no attractive country. Around one quarter of the respondents were divided on the issue- instead opting for nations such as Korea, the US, Turkey, and Kazakhstan, amongst others. 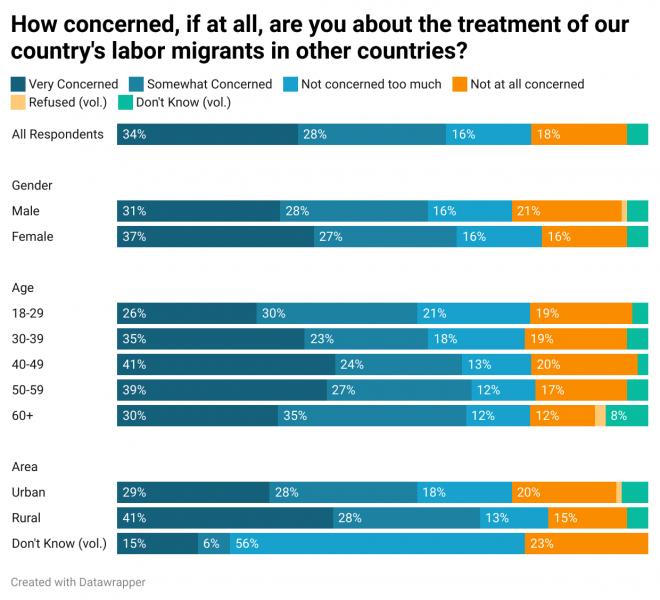 60% of Kazakhstani respondents were very or somewhat concerned about the treatment of their compatriots employed abroad. 15% were not concerned too much, and around 20% of the population reported no concern at all. The choice of response showed a clear correlation with the age of the respondent: the higher the age, the higher the concern. A clear division in opinion between rural and urban respondents was also present. Rural respondents demonstrated around 70% concern (very and somewhat concerned), with urban dwellers around 55%; the same difference is applicable to the share of those who are not at all concerned. However, the overwhelming majority of the population shows some level of concern 75%. 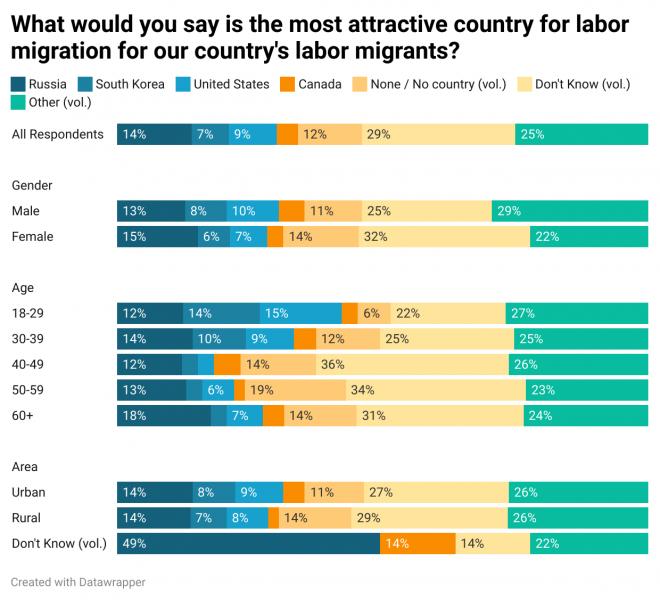 Kazakhstani respondents were also divided on the issue of the most attractive country for labor migrants. It is clear that they did not have a clear answer to this question due to the high share of those who preferred to say “do not know”, at 30%. Russia, at 14%, was slightly more popular. Among other countries, many chose the USA at 9%, or Korea at 7%. More than a quarter of the respondents said other countries were instead mostmore attractive for migration, including e.g. Canada. 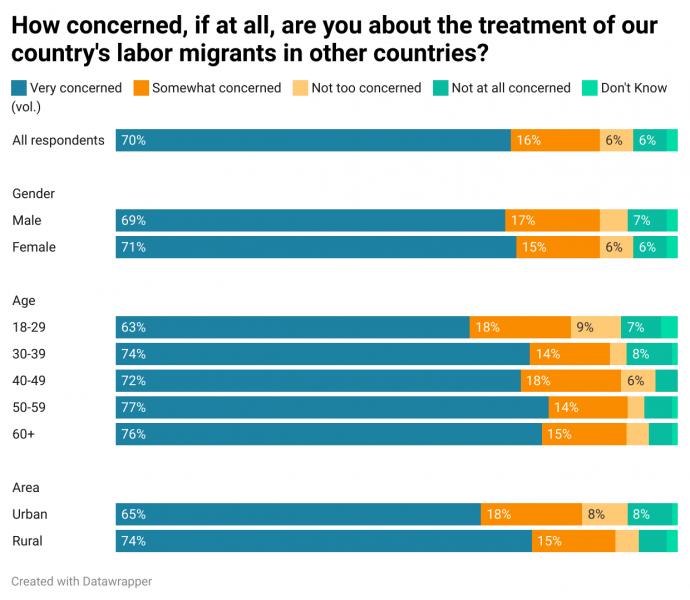 In Kyrgyzstan, the overwhelming majority of respondents were concerned about the treatment of Kyrgyzstani labor migrants abroad. 85% were very or somewhat concerned, while only 12% were not too or not at all concerned. The rural respondents expressed slightly more concern about the topic. 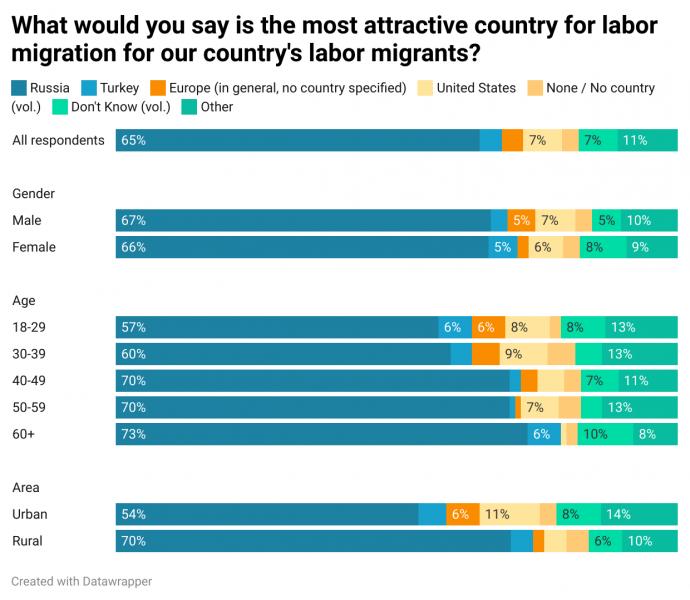 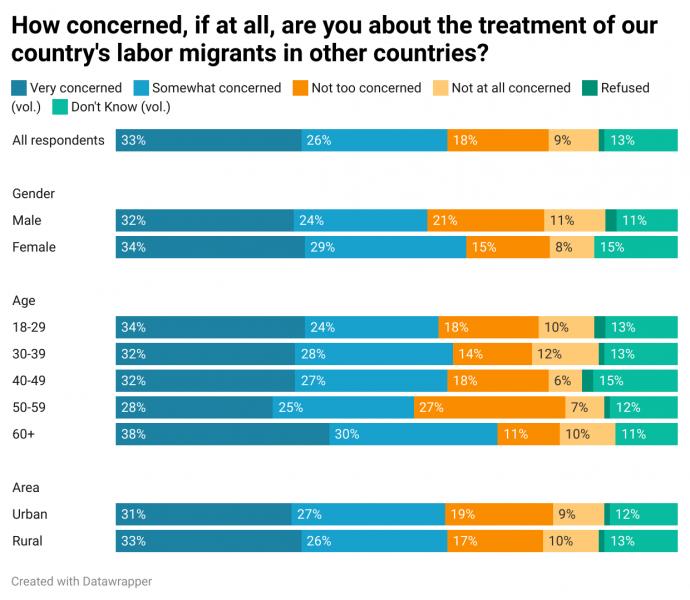 60% of Tajik respondents were very or somewhat concerned about the treatment of Tajikistani labor migrants abroad. The perceptions of different demographic groups were more or less uniform. The overwhelming majority of the Tajik population expressed some level of concern, at around 70%. The proportion of those who are concerned about the treatment of labor migrants was similar to the proportion of those who said they have a family member working abroad. 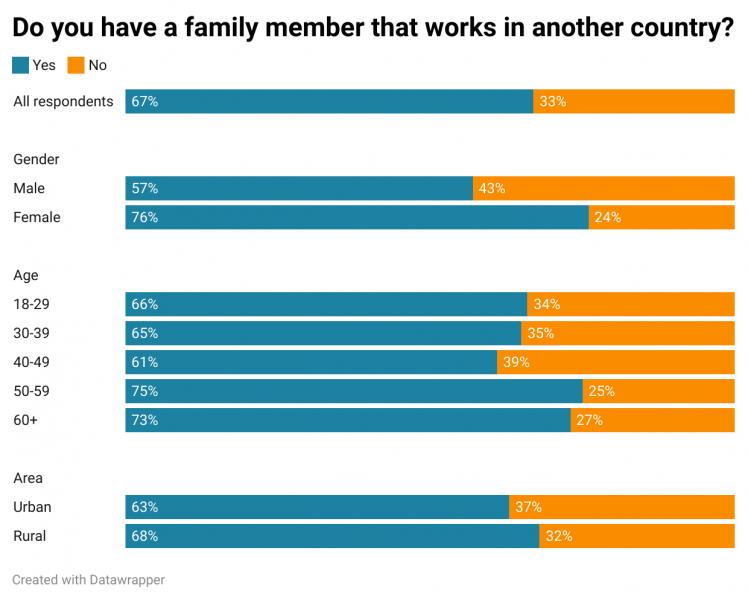 In addition to this, it appears that the majority of the Tajikistani respondents had at least one family member who work in Russia: 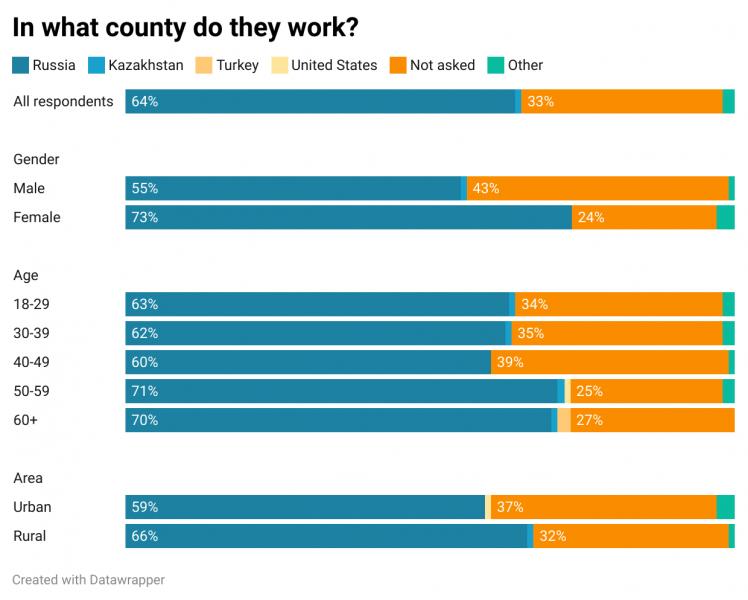 Moreover, the vast majority of Tajik respondents across all demographic groups believed that

Russia was the most attractive country in which to work: 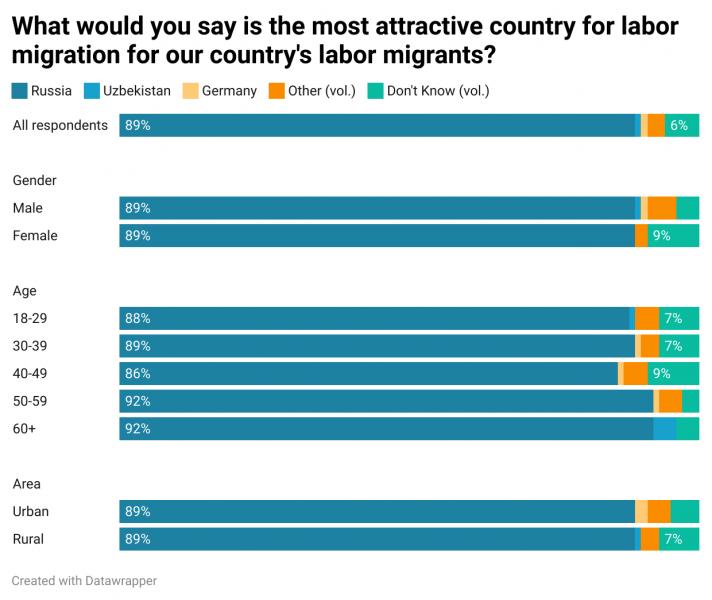 Within the Turkmen survey data, it is clear that “don’t know” was the most popular answer. This is understandable, given the response bias and individual safety precautions which respondents often needed to take because of the country’s political regime. Nearly 40% of respondents answered that they do not know how concerned they are, if at all, about the treatment of Turkmen labor migrants. In addition, 20% were not at all concerned, and around 40% were very or somewhat concerned. 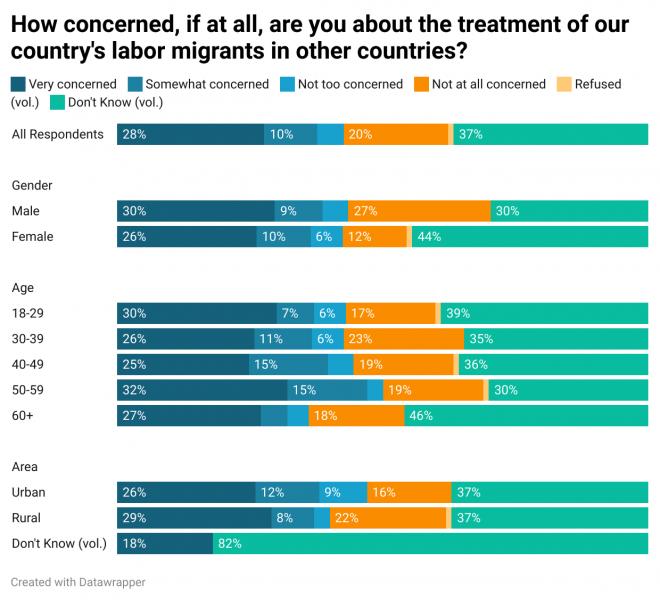 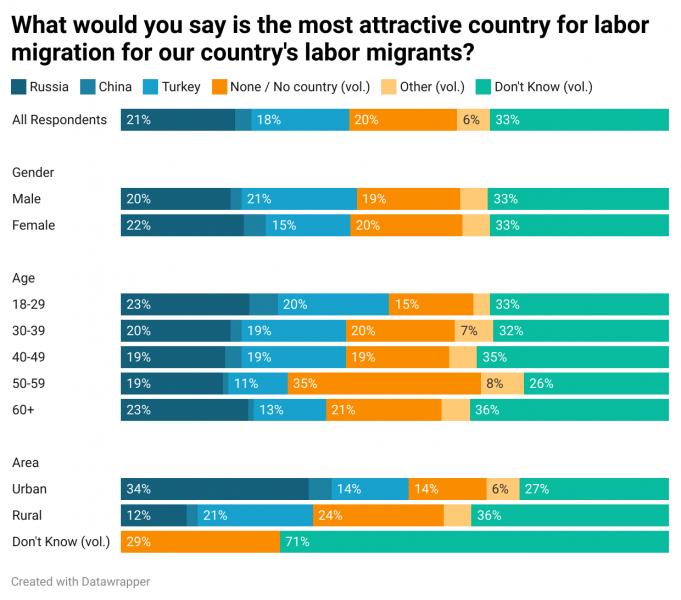